Today in 1987, Bayard Rustin passed away.

I watched Brother Outsider last night and learned even more about this inspirational man. He was not ashamed about his homosexuality, but had to stop being as open to be able to participate as a leader in the black civil rights movement. People on both sides of the movement against segregation used his arrest on a morals charge for sexual perversion against him. He was involved in the gay rights movement later in life.

He is most remembered for organizing the 1963 March on Washington. He was truly a genius organizer to make it happen – No computers, no cell phones… And he got 250,000 people to attend. Nothing like it had ever been done before. Read yesterday’s piece in The Guardian about him here.

Today I attended the 50th anniversary of that March on Washington. While I marched in honor of Bayard Rustin, I was also there for Trayvon Martin. So many oppressed communities share our struggles and I was happy that many speakers at today’s rally mentioned women’s rights, immigrant rights, LGBT rights, and others. See all of the photos at the Quist Facebook page. 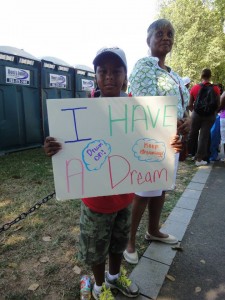