Quist is a free app for iPhone, iPad, and Android phones that brings lesbian, gay, bisexual, transgender, and queer (LGBTQ) and HIV/AIDS history to life.

Each day when a user opens the app on their smartphone or tablet, they will see the events from LGBTQ and HIV/AIDS world history that occurred on that date. Each event entry contains a brief description and an image, links to websites, videos, and products like DVDs or books, and a cited source. Events are searchable by date, year, country, and U.S. state.

Events range from LGBTQ individuals’ contributions to the arts and sciences, watershed moments in the LGBTQ liberation movements, milestones of the HIV epidemic, specific love stories from the last several hundred years, significant court cases and executions, and worldwide “firsts” from the first transgender member of parliament’s election to the first time a same-sex wedding aired on a sitcom.

There are currently approximately 800 historical events in the app and new events are being added every day. Examples of stories in the app can be found here.

Sarah Prager, a 28-year-old lesbian, is the creator and director of the project. She is available for interviews over e-mail, by phone, or in person (contact [email protected]). A Baltimore-based firm, Web Adaptive, did the coding and design of the app, while a team of volunteers from Massachusetts to Belgium collected the historical content.

Quist’s mission is to educate the world about the roots of the LGBTQ community, make LGBTQ history more engaging and relevant, and let LGBTQ youth know that others have shared their struggle. 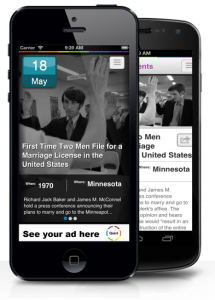