LGBT T-shirts No Longer in the Closet: An Online Wearable Archive 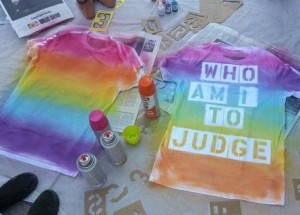 Recently, when St. Mary’s Academy in Portland decided to fire an academic advisor after learning she was a lesbian, students and alumni gathered and protested the high school’s decision. They painted homemade rainbow t-shirts that read, “Who am I to judge,” a reference to the Pope’s 2013 famous remarks about accepting homosexuality. The high school later reversed their decision.

Why exactly did these students decide to spend an evening spray painting white t-shirts and coming up with clever slogans? Simply put, these young activists knew that our attire can be a powerful tool of expression. In a culture where there exists a literal “fashion police,” it’s incredible that the common inexpensive t-shirt remains in style, an instrument of protest and visibility. In the past half-century, lesbian, gay, bisexual, and transgender communities have turned these simple blank fabrics into promotions of their identities. These shirts express everything from pride, disgust, humor and rage and stand in stark contrast to common perceptions of queer identity as hidden and invisible.

These often provocative clothing items make up a huge part of our LGBT heritage and culture, though they too often are thrown into our closets after a protest or a pride parade, or they’re found in the bottom of that ignored dresser drawer. The t-shirts that do make it to historical societies and archives are often processed, folded, and stored, functioning no more as a statement of visibility. Historians too often forget the value of material culture, and archives understandably use their scant resources to focus on papers and manuscript collections. 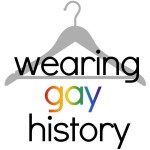 ounded in the fall of 2014, Wearing Gay History aims to bring LGBT material culture back into our historical conversations. The site is an online digital archive of historical LGBT t-shirts found in archives across the United States. The archive documents the history of LGBT cultures through textile collections and exhibits, and currently contains over 2,000 t-shirts from eight LGBT archives and archival holdings.

One of the archives’ main goals is to uncover the history of ignored LGBT cultures. For example, in an attempt to combat the “bi-coastal” bias of much of LGBT history, the site first digitized the entire t-shirt collection of the Chris Gonzalez Library and Archives, located in Indianapolis, Indiana. Queer people have always existed outside the gay havens of New York and San Francisco, and many t-shirts on Wearing Gay History highlight the richness American Midwestern and Southern queer experiences. Today, almost every state is represented, as well as nearly twenty nations spanning six continents.

Similarly, Wearing Gay History is committed to combating LGBT history’s focus on the culture of gay, white men.  The site strives to include items that bring to light the often-ignored histories of queer people of color, bisexuals, lesbians, and transgender persons. 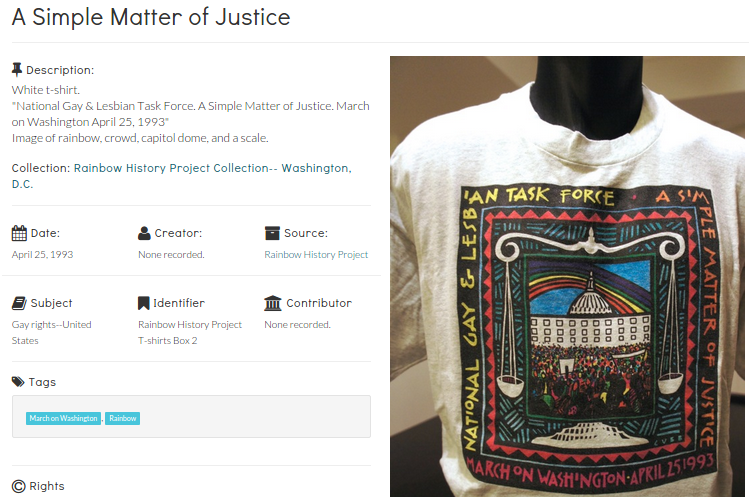 Wearing Gay History invites you to explore the many items and exhibits online and ponder how other seemingly mundane items in your daily life might one day help to explain your own history. T-shirts proved an early mass conveyor of social message for LGBT communities. It’s time to dust them off and analyze the incredible stories they hold. 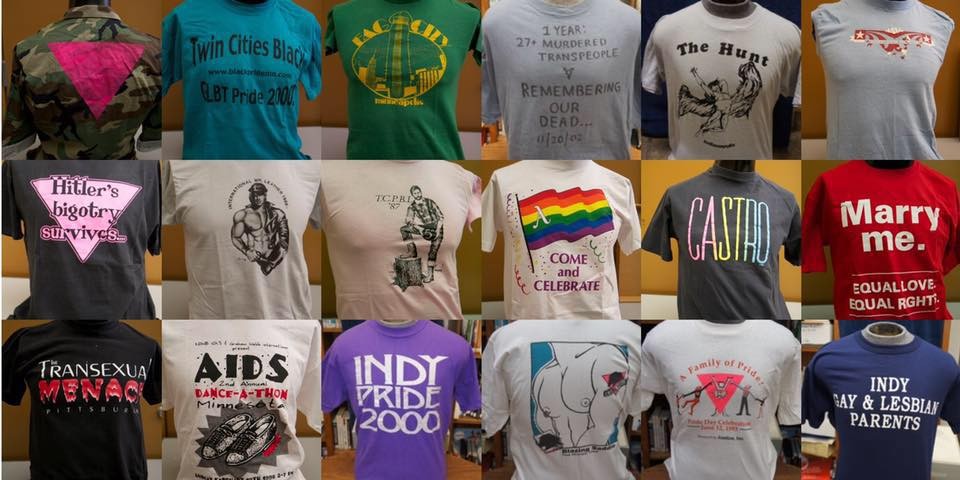 2 comments on “LGBT T-shirts No Longer in the Closet: An Online Wearable Archive”